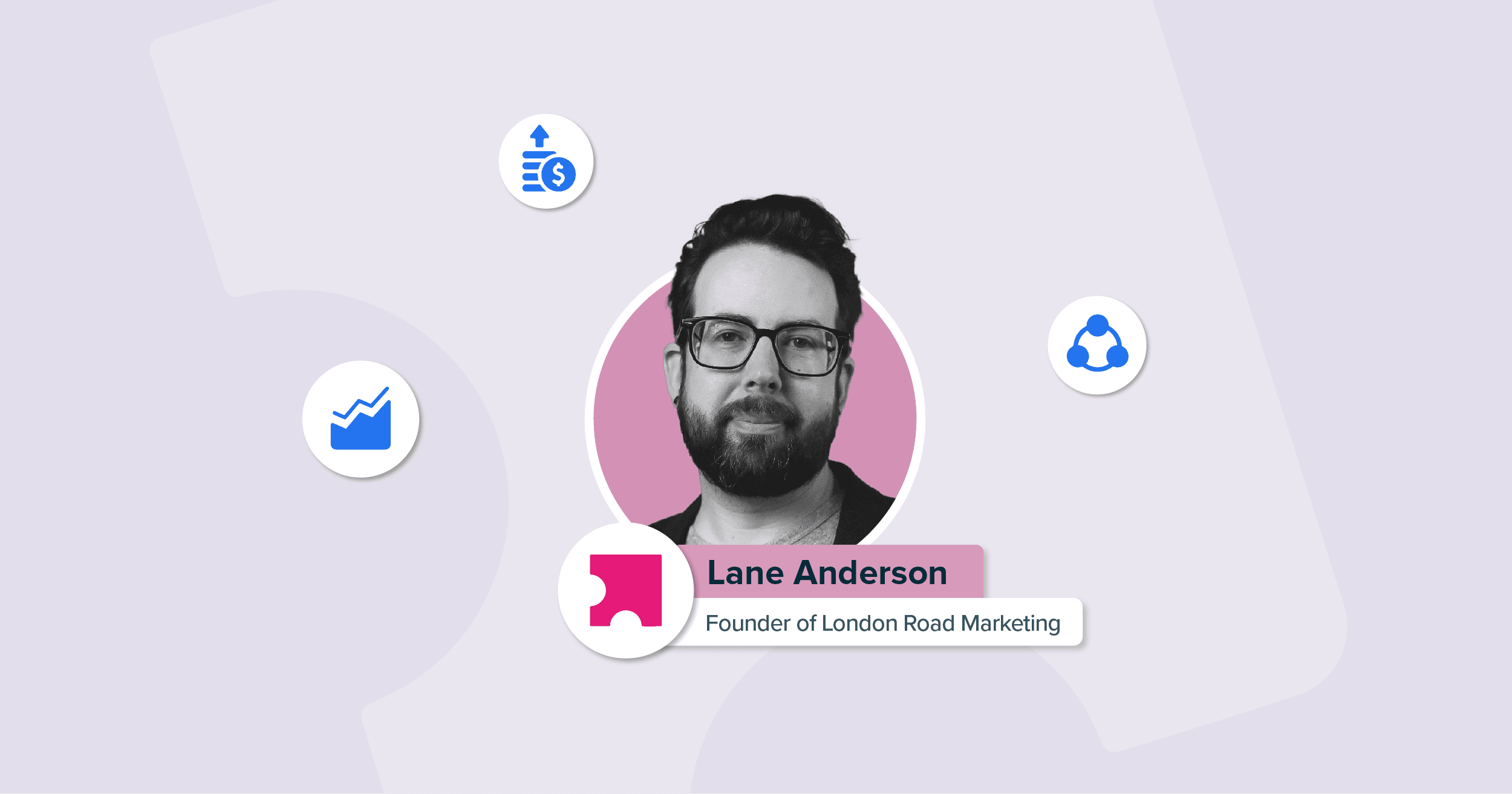 Lane Anderson, Founder of London Road Marketing, started his digital marketing agency in 2016 on his own with just two clients.

Fast forward to 2023, and their Lethbridge, Alberta-based agency is serving over 100 small-business clients each year.

Choosing the small business niche was a no-brainer for Anderson. He worked in marketing roles with billion-dollar companies in the past, including PokerNews Canada and Pokerstars, and noticed something interesting: many large-scale marketing agencies that work with big-brand clients apply the same marketing strategies to their small business clients.

When he started his agency, he knew he wanted to solve this generalized approach.

“It hasn’t really been done before by the agencies that are hundreds of employees large,” Anderson explains.

By building a business model that fostered in-person client communication locally while executing strategies at a centralized location–a model that has set his business up for long-term scalability.

“We were looking at the small to medium-sized cities where local really matters and talent is hard to find,” Anderson explains. “Places where most of the talent leaves town because there aren’t enough opportunities locally.”

So they created their first “satellite office” in Medicine Hat, Alberta in January 2022 by acquiring an existing marketing agency, Tag Concepts. Their goal was to continue meeting client management needs locally and the fulfillment of services remotely from Lethbridge, Alberta.

Being able to capitalize on word-of-mouth efforts by networking and promoting his services in small centers was crucial for Anderson. And he realized that his agency’s services didn’t need to be executed from the same location.

“We want to focus on communities where local supports local. You know each other, you’re on the same boards, you go to the same chamber events, and that’s where having a physical office really matters for us,” says Anderson.

And he doesn’t plan to stop this business model any time soon.

“This was kind of a beta test of this model, and it worked so well,” he shares. “So our big growth goals will be heavily around acquisitions because that’s the easiest, fastest, and most affordable way to scale.”

Anderson and his team plan to refine the process in the future to avoid hiccups, such as smoother onboarding. But the return on the investment is worth it to him.

“So many of these agencies are operating at break-even or five or seven percent, and it’s because they’re overstaffed, and their systems aren’t efficient like tools, bookkeeping, insurance, and all of those associated costs.”

Once London Road acquired the agency in Medicine Hat and centralized their systems and processes, they jumped to almost fifteen percent margins. However, Anderson has some requirements when it comes to purchasing agencies.

“Because marketing companies don’t technically have assets, you’re essentially buying the goodwill of the brand,” he explains. “When we acquire a business, the owner or the person who handled client management needs to stay in place, or else there’s no point. And that’s because it’s all about their relationships and community involvement.”

He’s created a nine-month vetting process to complete his due diligence in ensuring it’s a good business venture.

“We want to ensure that they’re also invested in making this work and becoming more profitable,” Anderson says.

Reputation is King in Small Markets

Although networking and word-of-mouth referrals have brought the majority of London Road’s clients through the door, he says reputation management (online and offline) is significantly more important in small centers.

“There have been businesses who have tried to start locally, they get a bad reputation, and then basically have to leave town or change businesses to be able to continue,” says Anderson. “It’s very tough to come back from that because everyone talks in small communities.”

His advice to turn around a negative experience with a client:

“You can’t always control what others say about your business,” says Anderson. “It can certainly be a downside of working with small business clients, but if you’re doing good work, that’s not going to happen.”

Another challenge his agency faces is competing with freelancers who lack experience and knowledge.

“There’s a zero barrier entry to marketing, so there are a lot of bad actors in the space,” Anderson explains. “Whether it’s intentional or not, they come across as scammy.”

He feels for local business owners who have to make a difficult decision about who to trust with their marketing budgets.

“We’re all saying we’re going to get you great results, so how is a business owner supposed to tell the difference between who’s legit and who just decided they were going to try this industry?”

And the way that Anderson has navigated this challenge is by relying on his agency’s reputation.

“We lean heavily on the words of our customers. Not our words. Because we can say whatever we want about ourselves,” Anderson laughs.

At the end of the day, customer reviews are the proof in the pudding. They answer ‘why’ a customer should work with your agency.

Aside from building up his agency’s reputation and acquiring smaller agencies, Anderson saw an opportunity to position his agency as the expert early on as a way to gain the trust of potential clients.

“Many small agencies that are just starting out are going to struggle to showcase the work they’ve done for existing clients–if they have any at all,” Anderson explains.

He says his agency was lucky to start with established poker brands to bypass the step of proving their expertise.

“It became a legitimizer,” Anderson says. “People thought, ‘Oh, you’re working for them. Okay, you must know what you’re doing.’”

If your clients see your agency as trustworthy, experienced, and knowledgeable, why wouldn’t they choose to work with you? And one way to position yourself as an industry expert, Anderson has found successful, is by sharing your knowledge with others.

“We’ve always been really big on giving people as much information as they have an appetite for. Knowing that execution is a totally different story, I’m not worried about giving away any trade secrets.”

He experimented with a weekly social media video series called ‘The Monday Marketing Minute’ that got people talking. He published them every Monday for two and a half years and built up a small-town level of notoriety.

“I’d be walking around town and people would say, ‘Hey, I see your marketing videos, you’re Lane, right?’ This eventually led to invites to speak on panels, lecture at college and university classes, speak at the entrepreneur center, and even more public speaking events, which helped establish our reputation as experts,” Anderson shares.

When Anderson chose to work with small businesses in tight-knit communities, he considered the potential downfalls of this niche.

“It’s all about prioritizing and putting money where it needs to go first,” says Anderson. “And if there’s a little bit of extra budget, then we can go further down the list.”

London Road works with 150 small business clients each year with varying budgets of up to half a million dollars. Although some of that budget goes towards conferences and other marketing-related projects that his agency doesn’t handle, Anderson created a successful strategy that includes advisory services.

“Most of our competitors are focussed on digital, which of course, is a big piece of what we do, but many are not offering truly full services,” says Anderson. “We talk about our services in three categories: advise, oversee, execute.”

Their team builds strong client relationships by sitting at executive tables with stakeholders to create a plan to get the most out of their marketing budgets.

“We’re technically being a chief marketing officer for hire,” he laughs. “And we’ll come up with a plan for them even if that spend isn’t through us, we’ll oversee the project, keep everything in line and cohesive. That’s what our small business clients really wanted–someone to take all of the marketing decisions off their plate.”

And managing his client’s decision-making has led to upselling opportunities.

“When you’re able to see the whole picture, then you’re able to find where the holes are,” says Anderson. “If you offer a free consult or something, you’re basically pitching a proposal and becoming like a salesperson. It’s a completely different relationship.”

Paying Back the Local Economy With Local Hires

When starting his agency, Anderson had one goal in mind that helped guide him through all of his business decisions: Creating as many ideal jobs for people as possible.

When building his team, he considered how he was feeling when he was looking for work. He thought about the benefits of being an entrepreneur, like flexible schedules, direct results on their income, freedom with vacation, and so on.

“I wanted to create jobs that were as good as if you were an entrepreneur. Not everyone is cut out to be an entrepreneur, or want to be, and it didn’t seem fair that they don’t get all the same benefits.”

Anderson looks for employees who want to work for good companies versus individuals who want a temporary position.

“We intentionally don’t hire contractors, freelancers, or outsource our work,” says Anderson. “Our team is built with real people in our communities who get salaries, benefits, and all of that. It’s really important to us.”

He admits that this has created some challenges in terms of hiring the right specialists when the work comes in.

“When everything is done in-house, it’s difficult to gauge when a full-time employee is warranted,” says Anderson.

But it was worth it for Anderson to stay true to his mission of creating local jobs in his community. As long as he clearly communicated with clients what a reasonable deadline would be, he could look at scaling his team for the project.

“We created a waiting list of sorts for those types of requests,” says Anderson. “That would give us a few months to hire the specialist we needed.”

Other than creating a waiting list, Anderson has always kept his team overstaffed so they’re ready when a client approaches them.

“We have enough contracts to cover the costs of that employee’s salary,” Anderson explains. “It’s definitely the more costly way of doing things that could be solved by using contractors or freelancers but having more staff than we need to ensure we’ve got the capacity is what we’ve done.”

Although Anderson has currently acquired one agency so far, he doesn’t plan to stop in the future. His agency's five-year acquisition plan looks like this:

"We plan to reach about 40 locations across the country eventually," Anderson shares.

He also aims to continue spreading awareness of London Road Marketing through his community speaking events and collaborating with other platforms.

Here are some of the ways Anderson has built a successful agency that works with local small business clients:

London Road Marketing continues to foster the growth of the local economies that they do business in–both by serving their clients as well as with their expansion plans.

Richelle Peace is a joyful writer with a degree in Journalism. She loves writing web content, blogs, and social media posts. Whatever the topic, she’s fascinated by learning and sharing.