Google Display & Video 360: The Ins and Outs Your Agency Should Know 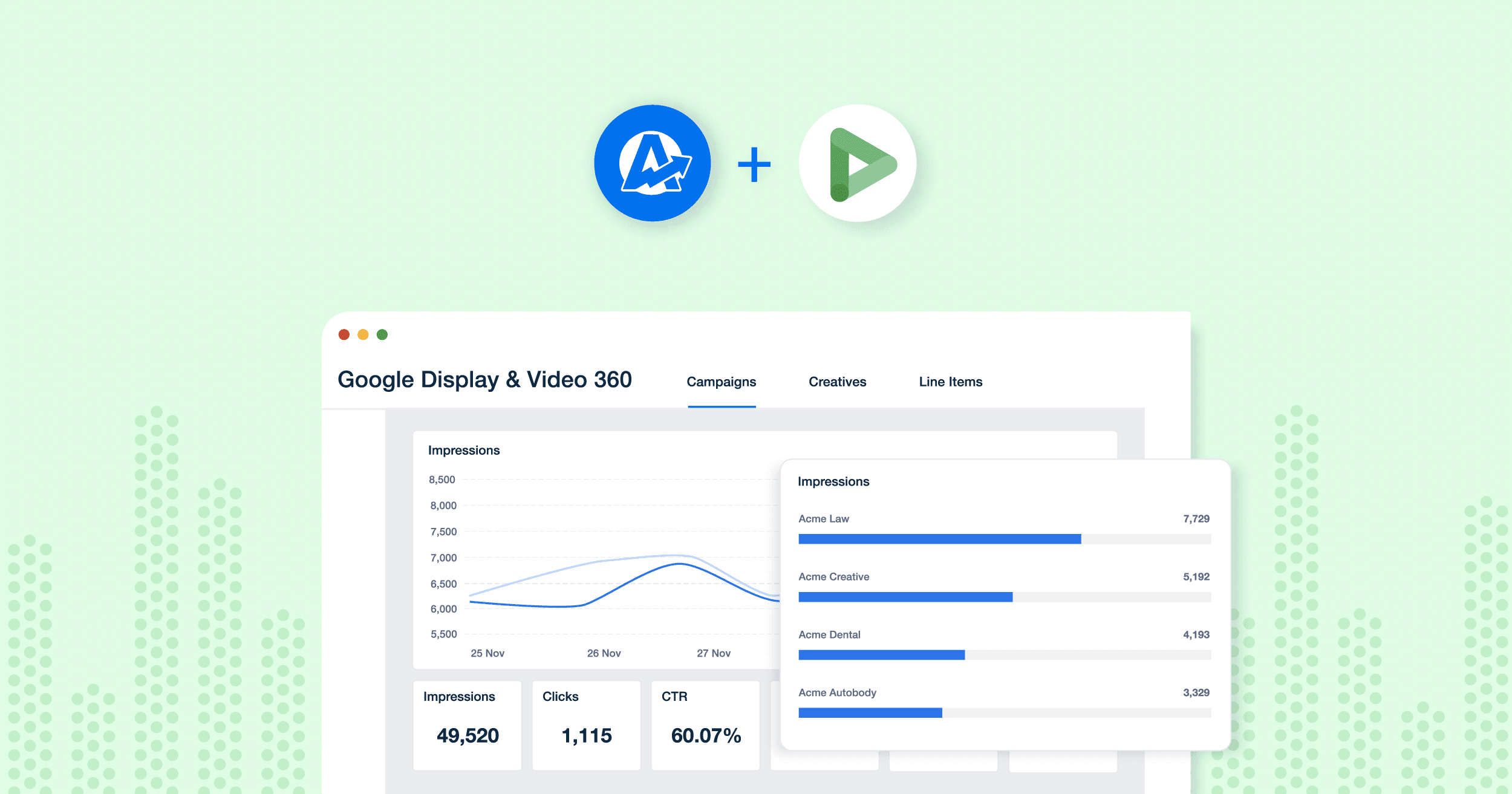 From functioning as an ad campaign manager to using machine learning intelligence to automate bidding, Google Display & Video 360 is a feature-rich, all-in-one platform for agencies to manage their online advertising campaigns across display, video, audio, and more.

It’s no secret that this platform has various cutting-edge features, but you may wonder how your agency can get the most out of it. Whether you’re new to Google Display & Video 360, or your agency is exploring its enhanced capabilities, read on to learn about:

While the Google Display Network (GDN) offers an impressive range of targeting options that will suit many agency clients, GDN can be limited in terms of its ability to deliver across the web and app ecosystem.

As such, the Google Display and Video 360 (GDV360) platform may be better suited for clients looking to reach a high volume of consumers using ads format that support larger-scale media buys.

With it, agencies with multi-channel campaigns can manage creative development, inventory, and audience targeting in one place.

And who isn’t a fan of all-in-one tools that make an agency’s life better?

Picture this scenario. A client approaches your agency to execute an intricate, large-scale campaign that requires resources from various subteams.

Your media buying team is responsible for managing and allocating ad spend. Additionally, they collaborate with the creative team to ensure seamless campaign execution. And after ads are run, the analytics team steps in to provide results, recommendations, and insights.

While these teams are all responsible for separate arms of your client’s ad campaign, they all need to know what’s happening. That way, there is coherence, continual communication, and successful results.

Instead of relying on a range of platforms, Google Display & Video 360 houses these moving parts in one place. In essence, it works as a campaign manager for cross-functional agency teams with a common goal.

Here’s a more detailed overview of each module:

Instead of relying on trial and error, Google Display & Video 360 does the heavy lifting for your agency when it comes to bidding for competitive ad placements.

Today’s digital marketing landscape is leaning heavily into machine learning and AI, and Google Display & Video 360 captitalizes on these capabilities to help automate the bidding process (based on pre-set parameters).

When used properly, this results in buying digital space with the highest likelihood of an impression or conversion (depending on your client’s goals). It also means that your agency won’t need to make guesses when maximizing a client’s ad spend or choosing digital ad placements.

If your agency prefers more autonomy over the process, there’s also a Custom Bidding feature (which is a bit more advanced). Create a custom bidding script and decide precisely how much you’d like to spend on an impression. That way, your agency will have more control over the rate of ad spend while optimizing more granular parts of the campaign.

Try the PPC reporting tool for free for 14 days!

Another great feature of Google Display & Video 360 is its built-in inventory, allowing seamless access to a range of publishers and ad exchanges.

This means that your agency won’t have to navigate outside of the platform to reach large-scale publishers with a broad reach in the digital, audio, and TV spaces.

To access a recommended list of publishers, simply input filters based on detailed parameters such as ‘Advertiser Time Zone,’ ‘Sensitive Category,’ and ‘Day of the Week’.

It’s also worth mentioning that Google Display & Video 360 recently introduced a filter to support a diverse set of publishers in historically marginalized communities.

Google Display & Video 360 has an advanced audience targeting capability where advertisers have access to:

Your agency’s creative development team won’t have to navigate outside the platform to design ads or communicate. Google Display & Video 360 also has built-in ad fraud protection to help avoid mishaps or hiccups.

Since this platform is part of the overall Google Marketing ecosystem, it has seamless integrations with other Google solutions, including Google Analytics, Google Cloud, and YouTube.

An end-to-end campaign manager like Google Display & Video 360 works when there are multiple moving parts to handle. It allows seamless collaboration while ensuring that all teams are on the same page.

This platform also offers more advanced-level capabilities to hit your clients’ aggressive goals and bolster brand awareness to the next level.

Conversely, Google Ads is an excellent option to meet your client’s goals when there aren’t as many intricate parts to consider.  And while you should consider client needs on a case-by-case basis–generally speaking–clients with small businesses may not necessarily have the elaborate ad campaigns that require a platform like GDV360.

And so, consider your client’s scope of work, ad spend, and allocated agency resources when deciding which platform to use.

The good news, no matter which path you choose for your clients, AgencyAnalytics has you covered.

The Google Display & Video 360 dashboard brings all of your clients' ad metrics together in one streamlined reporting platform.

If your agency also uses Google Display Ads, use a pre-built Google Ads dashboard to track client progress and stay one step ahead. Try it on AgencyAnalytics with a free 14-day trial.

How To Create a Campaign in Google Display & Video 360

If you’re ready to create your client’s first campaign in Google Display & Video 360, here’s a quick overview of how to do so:

Even after this process is completed, you’ll be able to add additional line items or even duplicate a campaign for easier set-up.

With so much at stake, you don’t want to skim on tracking campaign performance or miss out on any areas for improvement. And while your agency has access to analytics directly through the Google Display & Video 360 platform, it’s easy to get lost in a sea of data.

After you’ve set up a Google Display & Video 360 account, it’s easy to integrate those metrics into your AgencyAnalytics marketing dashboard. Simply:

And that’s it! Once connected correctly, GDV360 metrics will be imported and shown in your chosen dashboard.

Use the pre-built GDV360 dashboard, or customize it to meet your clients needs by adding widgets, charts, and other data visualizations. No matter your agency’s needs or preferences, AgencyAnalytics offers a full suite of features that will save you billable hours each month.

Faryal Khan is an experienced marketer and brand photographer with a passion for content creation. She creates value for brands through storytelling and captivating visuals.